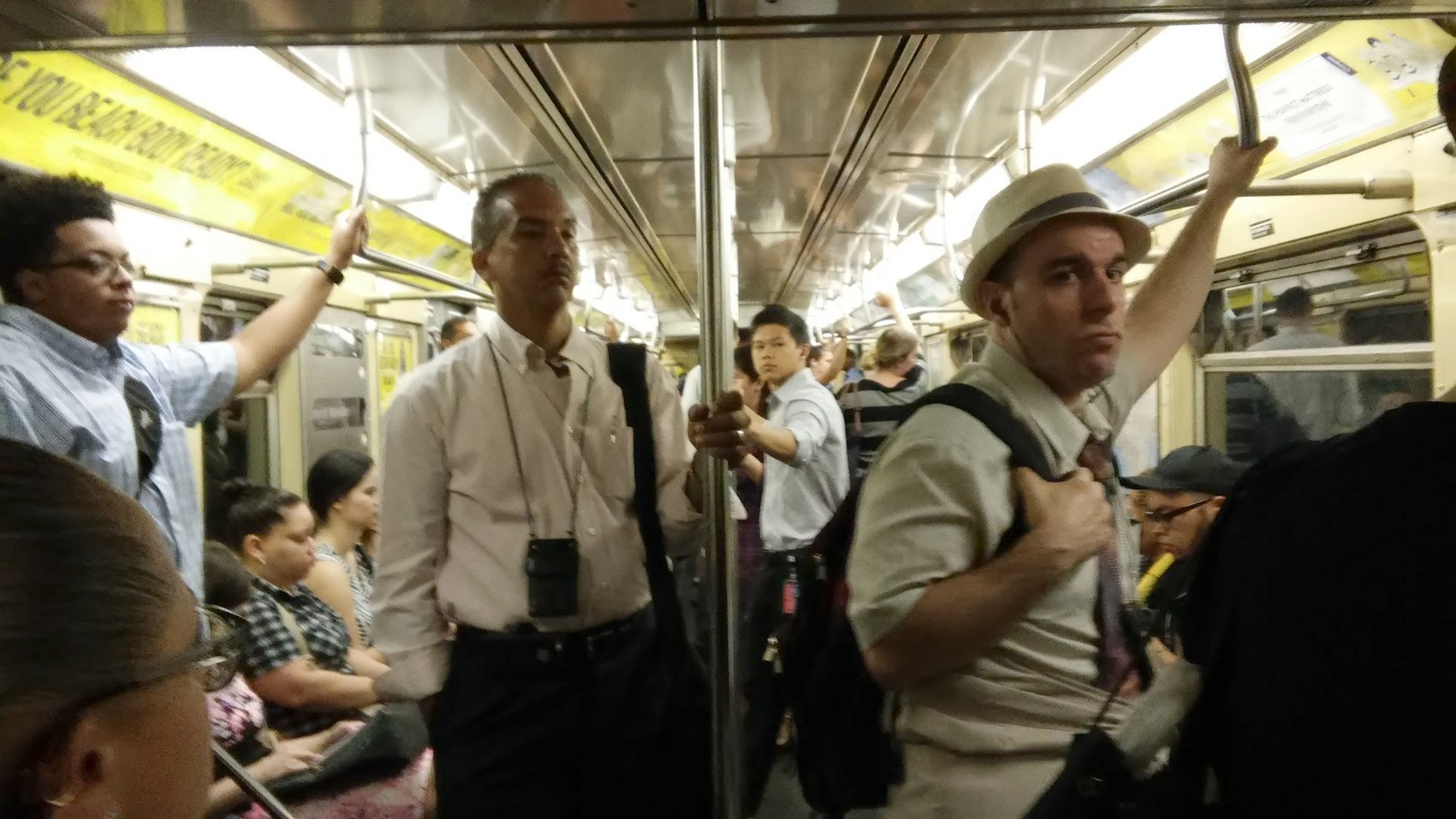 Observations on a crowded subway train

The J train whined like a dying banshee as it came to a stop at the last elevated subway station, Marcy Avenue. The doors opened, and a few riders trickled out of the crowded old car.

I moved deeper in to allow more people to push their way in. An older Asian woman guided her two young charges through the straphangers. It’s gotta be tough being kids on a crowded train when your face is butt level.

They didn’t seem to mind, however. They were deep into some invented game. The pair — a pig-tailed girl with a chubby round face and dark eyes, and a pudgy boy with a sleeveless t-shirt and cropped hair sticking up in all directions — were seeing who could hold their breath the longest.

It was doomed from the start. The girl kept accusing her sibling of cheating.

Their game lasted another minute, then the girl decided it was time to use her grandmother’s breast as a punching bag. The older woman didn’t even bat an eye.

The person beside them was oblivious. Earbuds jacked into her ears, the dark-haired Hispanic woman stared off into space. I had been standing behind her just minutes before as we both got stuck by the door. She turned her back on me then. Can’t blame her.

The subway train rattled and clanked its way up and over the Williamsburg bridge.

A well-dressed black woman stood nearby. She had a white blouse and blue skirt. Long curly hair draped down her back. Smooth skin. Her eyes rarely if ever left her cellphone, but when they did they seemed uninterested. She was texting long paragraphs. Don’t know what she was writing or reading, I’m not nosy. But she deftly held onto the upper rail with one hand, and tapped out her responses with a thumb in swift detail.

After Essex, the stop on the far side of the Williamsburg, I was able to move to the end of the car. Put my arms down.

An older gentlemen, perhaps Pakistani or Indian or neither, stood holding the pole near me. He had a messenger bag slung over his shoulder, light colored shirt, no tie. A neatly trimmed salt-and-pepper mustache stuck out from under his tall nose. His eyelids battled to close, but he wouldn’t surrender.

A dark-skinned construction worker stood near the doors opposite the ones I used to enter the train. He had his helmet and bag on the floor at his feet. Thin, trim, his white t-shirt had seen better days. So had his work boots.

We reached another stop. People got off. People got on. A woman moved quickly to take a vacated seat like it was precious gold. She had light skin, hair pulled back in a tight pun. There were freckles spread across her cheeks, her arms, her ample cleavage.

The two children were still playing. Still on the subway. Now they were embroiled in a finger war. Seemed familiar, like something I likely played as a child with my pals. Couldn’t say for certain the rules were the same, however. I couldn’t really follow it. They were chopping at one another, counting fingers like they’d been severed. The girl leaned against her grandmother. The boy stood alone, but at one point held on to his guardian’s arm to steady himself against the pitch and yaw of the J.

Beside them a young teen slept. He was slouched in the seat, knees far apart, feet planted wide. His red t-shirt rode up to expose his stomach.

We stopped at Chambers. The children and their elder departed, as did many others.

A squat white man got on. A straw fedora rested upon his head, which likely hid away his baldness. Slouched over, jacket tied around his waist, he looked like a 1930s news reporter heading to Cuba. He was followed by a flood of young women with heavy backpacks.

The train eventually grumbled to a stop at Broad Street. End of the line.